Author Nicholas Carr helped kick off yet another round of stories about how maybe people don’t like e-books that much after all and we’ve reached peak e-books after the AAP reported increased e-book sales of “just” 5% in the 1st quarter of 2013. Here are entries in the genre by Neil Irwin and Om Malik and here’s Carr’s graph, which is making the rounds: 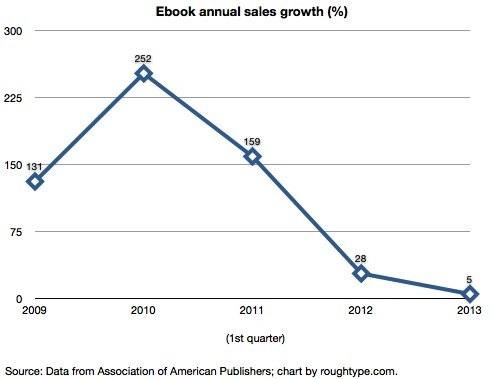 Yes, 5% doesn’t seem like much compared to the exponential growth we’ve seen in recent years. But let’s get some context here. First, here’s another way of showing the exact same data in Carr’s chart: This graph definitely captures what appears to be a plateauing effect (at least, if you look strictly at Q1 numbers). It’s not exponential growth. But it’s not at all a decline.

Also, here’s what both graphs ignore: E-book sales were up 5% at a time when overall trade sales were down nearly 5%. In other words, e-books were still a growing format despite an overall sales decline. In the adult trade market they were up 13.6% at a time when hardcovers were down 0.6% and paperbacks up just 1.7%.

And for the first time ever in Q1 e-books are now the leading format in the adult market, even more than paperback (note: percentages don’t add up to 100% because I’m just including the three largest formats):

In fact, when you compare the share of market over the past few years you see a pretty consistent pattern.

This directly contradicts Neil Irwin’s assertion that “the ratio of printed books sold to electronic books is going to stabilize at a higher level than it had seemed likely a year or two ago,” particularly when you factor in the fact that e-books have lower price points and yet are generating more revenue.

And, lastly, as author David Gaughran often points out, the AAP stats don’t include self-published e-books, which make up a substantial portion of the market, including at least 25% of B&N’s Nook sales.

Let’s stop philosophizing about how people just don’t like e-books very much or only like them in certain contexts or for certain genres or all the people who will convert have already done so.

E-books have never been on pace to rout the print market all at once. It’s always been a steady march, and it’s one that’s continuing.

CORRECTION: The original version of this blog post attributed the Washington Post Wonkblog article to Ezra Klein, but it was actually written  by Neil Irwin. Klein is the editor of Wonkblog. Sorry about that!