I have been casting about for the proper metaphor for seeing the cover of your book for the first time. One writer I know compared it to childbirth: After a lot of hard work you get to see what your baby looks like. But then, well, I’m pretty sure people always like their babies, and they don’t always like their covers (though I sure love mine!)

Then I was thinking it was kind of like pottery, how you spin a pot and throw some glaze on there and put it in the kiln and it comes out looking shiny. But that’s not quite right either, because you pretty much know what a pot is going to look like when it comes out.

As an agent, I have heard many authors say that seeing the cover was when the whole publishing process seemed “real.” And now I see what they mean. It does seem more real.

Only: I think I misunderstood what people meant by “real.”

I had always thought it felt “real” for writers because the cover made the whole thing look more like an actual book. And yeah, that’s probably a part of it. But that’s not really how I experienced the “real” thing. There was more to it than that.

Up until that point when you see the cover, it’s difficult to imagine that someone else reading your book will have a different imagination of how things look and feel than you. As a writer, you have a certain idea of the physical and artistic aesthetic of the book: what the characters look like, which parts of the book comprise the essence, and what people will take away from it.

So when you see the cover for the first time, at first there’s inevitably a “Whoa, this wasn’t how I was picturing it.” And of course it wasn’t how you were picturing it! No one is going to interpret a book the same way you do, even though you wrote the darn thing.

But then, when the cover is good, there’s quickly a dawning that it captures the essence of the book. It’s not your imagination you’re seeing represented… and yet it is. It may not be how you physically pictured it, and yet there’s something there that is so so so right.

The real metaphor, I realized, is that the cover process is kind of like a physical manifestation of the writing and reading experience itself. People are out there reading your book, and they’re not picturing the same castle that you were picturing when you wrote it, and they’re not imagining the characters looking the same way as you were, and they’re not seeing the same fields and mountains. What’s happening in the minds-eye is unique to every reader.

And yet despite those differences, there is an essence that binds the writer and reader, a shared kernel that is hopefully passed through the words. We don’t often get those different interpretations drawn out for our viewing pleasure, but when the cover comes along, it’s “real” because it’s a reminder that a book isn’t all yours anymore. It will soon belong to readers, who will picture a different character and world than you were picturing, while hopefully absorbing the essence what you were truly going for.

I couldn’t be happier with how the cover for JACOB WONDERBAR turned out!! When I saw these characters illustrated I couldn’t believe how well they were captured. Thank you so much to Christopher S. Jennings for the illustration and Greg Stadnyk for the design! 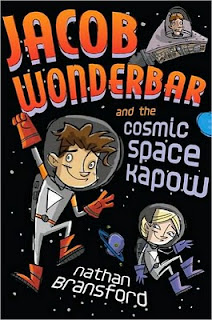